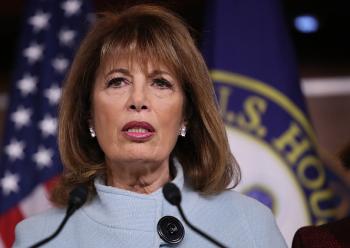 Today, a bipartisan group of legislators sent a letter to President Donald Trump expressing their disappointment in his April 24th statement, and asked him to directly affirm the Armenian Genocide, reported the Armenian Assembly of America (Assembly).

“The Armenian Assembly applauds Congresswoman Jackie Speier for spearheading this initiative and the bipartisan support from the Armenian Caucus Members,” stated Assembly Executive Director Bryan Ardouny. “We appreciate the continued efforts to unequivocally affirm the Armenian Genocide, especially given the alarming statement by Turkey’s authoritarian leader that the relocation of Armenians in 1915 was ‘reasonable.’ The mass deportation of an entire race is never reasonable – not 104 years ago and not today,” he added.

“We want to express our disappointment that your statement did not directly acknowledge the Armenian Genocide as President Ronald Reagan did during his presidency. However, there is no wrong day to recognize the Armenian Genocide. We hope you will consider future opportunities to pay fitting tribute to the memory of those targeted for their faith, those who perished and those who survived, as well as to the brave men and women in our military, who continue to proudly serve our country and defend our most cherished ideals and freedoms,” the letter to President Trump read.

The letter also references the heroic efforts of Major General James G. Harbord, General John J. Pershing’s Chief of Staff during World War I, who, at the direction of President Woodrow Wilson, led an American Military Mission to Armenia in 1919. Major General Harbord and the United States Military in Armenia is highlighted in the Armenian National Institute’s (ANI) new exhibit, available online.

As with previous administrations, this year’s statement reflected a dictionary definition of genocide and also used an Armenian expression, Medz Yeghern, which the Armenian Assembly described as a missed opportunity to end genocide denial.

Last month, over 25 U.S. Senators and Representatives issued statements and participated in events from New York to California commemorating the Armenian Genocide. Speaker of the House of Representatives Nancy Pelosi (D-CA) remarked in her April 24th statement:

“One hundred and four years ago, the Ottoman Empire began its horrific, systematic murder of more than 1.5 million innocent Armenian men, women and children. For over a century, the Armenian people have stood courageously against those seeking to rewrite history and deny the Armenian genocide,” Speaker Pelosi said. “We have a moral obligation to remember these barbaric acts of ethnic cleansing and continue to acknowledge the truth of this dark stain on the history of the world. To honor the memory of those lost and the suffering of those who survived, we firmly and unequivocally denounce all attempts to devalue or minimize these heinous crimes,” she added.

Established in 1972, the Armenian Assembly of America is the largest Washington-based nationwide organization promoting public understanding and awareness of Armenian issues. The Assembly is a non-partisan, 501(c)(3) tax-exempt membership organization.