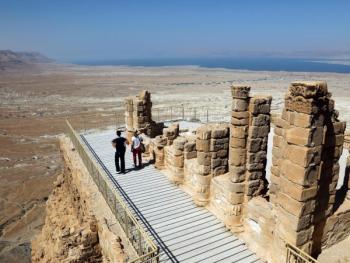 Donald Trump cancelled a planned visit to the ancient fortress of Masada in Israel after he was reportedly told he could not land his helicopter on top of the Unesco-listed site.

The US President was due to give a speech at the top of the rocky plateau in the Judaean Desert but instead will deliver his address at the Israel Museum in Jerusalem.

Initial reports said the cancellation of the trip to Masada was due to the hot weather but Israel’s Channel 2 claimed the cancellation resulted from the fact helicopters are not allowed to land on the top of Masada, networkIsrael National Newsreports.

Mr Trump’s aides were reportedly told landing a helicopter on the summit of the site, which is described by Unesco of “majestic beauty”, could damage the archaeological artefacts due to the wind movement generated.

Earlier this week, Eitan Campbell, director of Masada National Park toldThe Jerusalem Post: “The Americans will land in the Bar Yehuda landing strip. They will go up to the mountain by cable car.”

Bipartisan Group of Legislators Express Disappointment, Ask President Trump to ...
Today, a bipartisan group of legislators sent a letter to President Donald Trump expressing their disappointment in his April 24th statement, and asked him to directly affirm the Armenian Genocide, reported the Armenian Assembly of America (Assembly).

Obama and Chill: Former President’s First Hollywood Series is an ...
By CCN.com: Barack and Michelle Obama just announced the lineup of projects they’ll be releasing on Netflix – with a documentary taking aim at Donald Trump’s presidency listed among them.