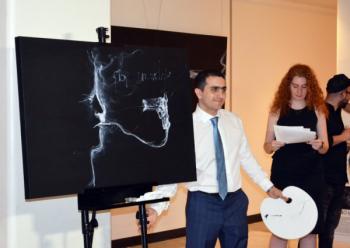 New York-based Armenian artist Mher Khachatryan is intrigued by the grace he sees in smoke and fire, linking it to the wonder of life and death. 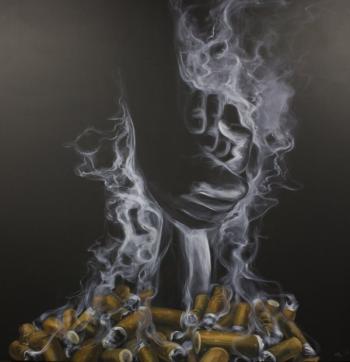 He depicts scenes in smoke created with oil on canvas, and although – especially in light of recent, tragic events – smoke isn’t generally seen as something positive, Mher looks to find beauty in it as an art form, Metro reports.

Although he is obsessed with the stuff, ironically, the artist has never tried smoking as he’s always been aware of its health risks.

‘When I was very young, one of my favorite commercials was the Marlboro commercial, where you saw this strong cowboys riding the horse in the beautiful nature and you wish you were one of them,’ said Khachatryan.

‘But the reality of the beautiful commercial was not very beautiful. Wayne McLaren, who once portrayed the “Marlboro Man” died after a long battle with lung cancer.

‘Some of his last words were: “Take care of the children. Tobacco will kill you, and I am living proof of it”.’

Khachatryan was asked to show his work at the World No Tobacco Day in May this year.

He later began painting when he discovered his uncle’s paintings.

After being self-taught for years, he attended the Hakob Kojoyan art school in Yerevan in Armenia, and then the Art college of Panos Terlemezyan, before upping sticks and heading for the bright lights of the USA.

He started using smoke in his paintings because: ‘it reminds us of our own life, how it can just start and finish and we have no control over it’.

His next exhibition will be in Michigan, USA, at the Gerald Ford Presidential Museum Grand Rapids, in September, and it will depict scenes from 9/11.

The exhibition will be dedicated to the victims of the 2001 terrorist attack.

Evgeny Kissin. I will not perform in Turkey until its ...
Mr. Kissin, a dominant presence in music since he emerged as a teenage prodigy in the 1980s, will highlight his talent in a concert devoted to Jewish composers on Wednesday at Carnegie Hall.

PRESIDENT MAKES ADDRESS AT SESSION OF UN GENERAL ASSEMBLY
On September 29, President Serzh Sargsyan partook in the 70th session of the UN General Assembly in New York, where he made an address.***Statement by the President of the Republic of Armenia Serzh Sargsyanat the 70th Session of the UN General AssemblyDistinguished President Lykketoft,I congratulate you upon election to the honorable post of the President of the United Nations General Assembly. I am confident that under your able leadership this jubilee Session will meet expectations we all harbor.Distinguished Delegates,Ladies and Gentlemen,I also congratulate all of us upon the 70th anniversary of the United Nations. The establishment of this Organization had been one of the greatest achievements of the humankind that consolidated nations around shared aspirations and principles. The past 70 years have been characterized by the most important positive developments – an end was put to colonialism, racial discrimination and apartheid. Many people around the world exercised their right to self-determination, got in charge of their own fate by establishing and building independent states of their own, thus increasing the number of the UN member States from 51 to 193.

Angelina Jolie Criticizes U.N. for Inaction in Syria
Angelina Jolieaddressed the United Nations Security Council at the U.N. headquarters in New York on Friday morning, April 24. Angelina criticized U.N.'s failure to end war in Syria and appealed for urgent help for the growing ranks of Syrian refugees.The "Maleficent" actress said, "The purpose of the U.N. is to prevent and end conflict, to bring countries together, to find diplomatic solutions and to save lives. We are failing to do this in Syria."