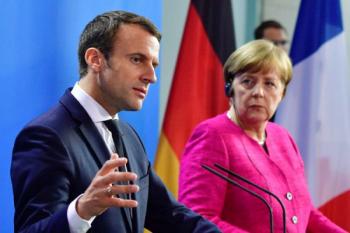 The German government said in a statement that Merkel and Macron spoke on the phone, with both strongly condemning the new nuclear test in North Korea. “This latest provocation by the ruler in Pyongyang has reached a new dimension,” it added.

Merkel and Macron agreed that North Korea was violating international law and that the international community must react decisively to this new escalation, Berlin said.

“In addition to the United Nations Security Council, the European Union also has to act now. The Chancellor and the President expressed their support for a tightening of EU sanctions against North Korea,” the statement said. [

Flying Cars Are Expected to Be Everywhere in Just a ...

France 24. How to live in an unrecognized State in ...
Stepanakert, the capital of Nagorno-Karabakh, works like any other European capital with its government, institutions, public television,

Charles Aznavour memorial plaque inaugurated at first Paris apartment building ...
May 22, 2019 marks the 95th anniversary of the co-founder of Aznavour Foundation, legendary artist Charles Aznavour. In the eve of the great artist’s birthday,different events are being organized around the world throughout the year.

Armenian genocide: 'My grandparents didn't want to tell me all ...
April 24 is a day of commemoration of the 1915 Armenian genocide. This year, for the first time, France is also officially marking the date.

​AGBU PAD SAYAT NOVA INTERNATIONAL COMPOSITION COMPETITION ANNOUNCES WINNERS
For over a decade, the AGBU PAD Sayat Nova Composition Competition has been inviting musicians of all heritages to be inspired by the grand tradition of Armenian arts.