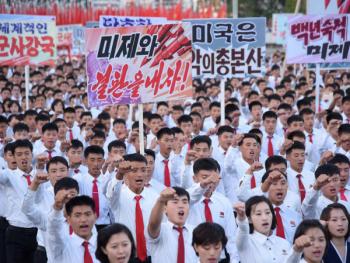 North Korea's state newspaper reported Thursday that 4.7 million students and workers have expressed a desire to enlist or reenlist in the nation's army, potentially adding a major boost in manpower to what is already one of the largest armed forces in the world.

It is difficult for outside analysts to gauge the accuracy of the report in the Rodong Sinmum newspaper. North Korean state media has issued similar claims during past moments of tension. Earlier this summer, for example, it claimed that 3.5 million citizens had signed up for the army after the United Nations imposed new sanctions on Pyongyang.

Most estimates suggest that North Korea has an unusually large number of armed forces personnel for its population of 25 million. The U.S. State Department has estimated that North Korea had more than 1.18 million armed forces personnel in 2014, making it the fourth-largest army in the world after China (2.37 million), India (1.41 million) and the United States (1.43 million

For comparison, Iraq's military in 2003 was estimated to be have 445,000 men for a population of around 26 million people

North Korean pop icon Hyon Song-wol leads Olympics diplomatic delegation ...
The former lover of Kim Jong-un who was once rumoured to have been killed, now, has a new role - to check preparations for an art troupe she also leads during next month's Winter Olympics.