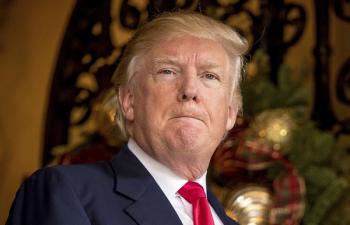 Donald Trump has threatened to withhold billions of dollars in aid from those nations which criticise his controversial decision to unilaterally recogniseJerusalem as the capital of Israel.

In a raising of the stakes over the US’s move to recognise Jerusalem and shift its embassy there - something long requested by Israel and their conservative supporters in the US - Mr Trump said he could penalise those countries that voted against the move at the UN.

Previously, the US’s UN Ambassador Niki Haley had warned the US would would be “taking names” of any countries who supported a resolution criticising Washington’s actions. A vote is scheduled to take place on Thursday after the US on Monday vetoed a vote by the UN Security Council that would have demanded Mr Trump reverse his decision.

The Associated Press said Mr Haley had written to most of the 193 UN members states warning of possible retaliation. She said the President was taking the matter personally.

“We’re watching those votes. Let them vote against us. We’ll save a lot. We don't care.”

Earlier this month, Mr Trump declared he was recognising Jerusalem as the capital of Israel and moving the US Embassy from Tel Aviv, a decision that other countries had for decades declined to take as the final status of the city was always considered central to part of any peace negotiations between Israel and the Palestinians.