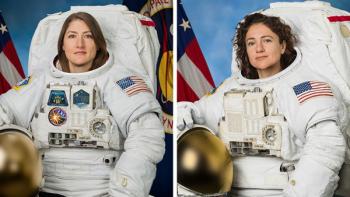 Jessica Meir and Christina Koch ventured outside the International Space Station on Friday to replace a power controller.

NASA reached a milestone on Friday morning when two Americans ventured out of the International Space Station to replace a power controller: The astronauts, Jessica Meir and Christina Koch, had undertaken the first all-female spacewalk.

Shortly before 8 a.m., live video of the event showed two bulky white figures — first Ms. Koch, then Ms. Meir — emerging slowly from the space station, which glowed against the blackness of space.

The women could be heard talking to each other, and a helmet camera showed Ms. Meir’s view as she clambered along the outside of the space station on the way to her work station.

At one point, she could be seen crossing beneath the dangling feet of Ms. Koch. “Right beneath your feet, so don’t move down,” she said.