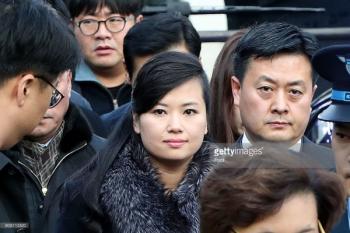 The former lover of Kim Jong-un who was once rumoured to have been killed, now, has a new role - to check preparations for an art troupe she also leads during next month's Winter Olympics.

A North Korean delegation has arrived in Gangnueng, a venue for its art performances at next month's Pyeongchang Winter Olympics, to inspect art centres in the city.

The seven-member team had been scheduled to begin their two-day inspection trip on Saturday but had cancelled with no explanation.

Officials from both Korea's used a cross-border hotline to reschedule the visit.

The delegation is being led by Hyon Song Wol, head of North Korea's Samjiyon Orchestra, and director of the country’s most famous girl-band, the Moranbong Band.

Appearing live on South Korean television, Hyon Song Wol didn't speak when she walked past a crowd of reporters, onlookers and a barrage of camera flashes before boarding an express train at Seoul's railway station for the eastern city of Gangneung, where her art troupe is to perform during the games.

Hyon Song-wol has been the subject of fevered speculation for years. The Moranbong Band - North Korea's answer to the "Spice Girls" - was hand-picked by leader Kim Jong-Un.

Intelligence agencies believed she and Mr Kim became romantically involved around 2002, after Mr Kim returned home from studying at an elite private academy in Switzerland.

Mr Kim was later said to have been ordered by his father Kim Jong-il to break off his relationship. She went on to marry an officer in the North Korean army with whom she had a baby.

She made a return to the limelight in early 2012 when she performed at an event in Pyongyang to mark International Women's Day, which was attended by Mr Kim.

A year later Hyon appeared in public wearing an army colonel’s insignia, and thanked Mr Kim for his “heavenly trust and warm care” in promoting the arts.

The preparations are part of the North's participation in the games, an apparent diplomatic breakthrough after months of high tension over the North's nuclear and missile programme.

North Korea will send 22 athletes to the neighbouring South to compete in three sports and five disciplines.

The Winter Games will be held from 9-25 February. 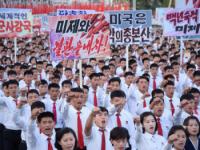 North Korea claims almost 5 million have signed up to ...